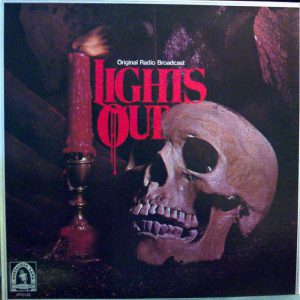 Created by Wyllis Cooper and then eventually taken over by Arch Oboler, versions of Lights Out aired on different networks, at various times, from January 3, 1934 to the summer of 1947 and the series eventually made the transition to television. Lights Out was one of the earliest radio horror programs, predating Suspense and Inner Sanctum.

In the fall of 1933, NBC writer Wyllis Cooper conceived the idea of “a midnight mystery serial to catch the attention of the listeners at the witching hour.”  The idea was to offer listeners a dramatic program late at night, at a time when the competition was mostly airing music. At some point, the serial concept was dropped in favor of an anthology format emphasizing crime thrillers and the supernatural. The first series of shows (each 15 minutes long) ran on a local NBC station, WENR, at midnight Wednesdays, starting in January 1934. By April, the series proved successful enough to expand to a half-hour. In January 1935, the show was discontinued in order to ease Cooper’s workload (he was then writing scripts for the network’s prestigious Immortal Dramas program), but was brought back by huge popular demand a few weeks later. After a successful tryout in New York City, the series was picked up by NBC in April 1935 and broadcast nationally, usually late at night and always on Wednesdays. Cooper stayed on the program until June 1936, when another Chicago writer, Arch Oboler, took over. By the time Cooper left, the series had inspired about 600 fan clubs.

Cooper’s run was characterized by grisly stories spiked with dark, tongue-in-cheek humor, a sort of radio Grand Guignol. A character might be buried, eaten, or skinned alive, vaporized in a ladle of white-hot steel, absorbed by a giant slurping amoeba, have his arm torn off by a robot, or forced to endure torture, beating or decapitation—always with the appropriate blood-curdling acting and sound effects.

Though there had been efforts at horror on radio previously (notably The Witch’s Tale), there does not seem to have been anything quite as explicit or outrageous as this on a regular basis. When Lights Out switched to the national network, a decision was made to tone down the gore and emphasize tamer fantasy and ghost stories.