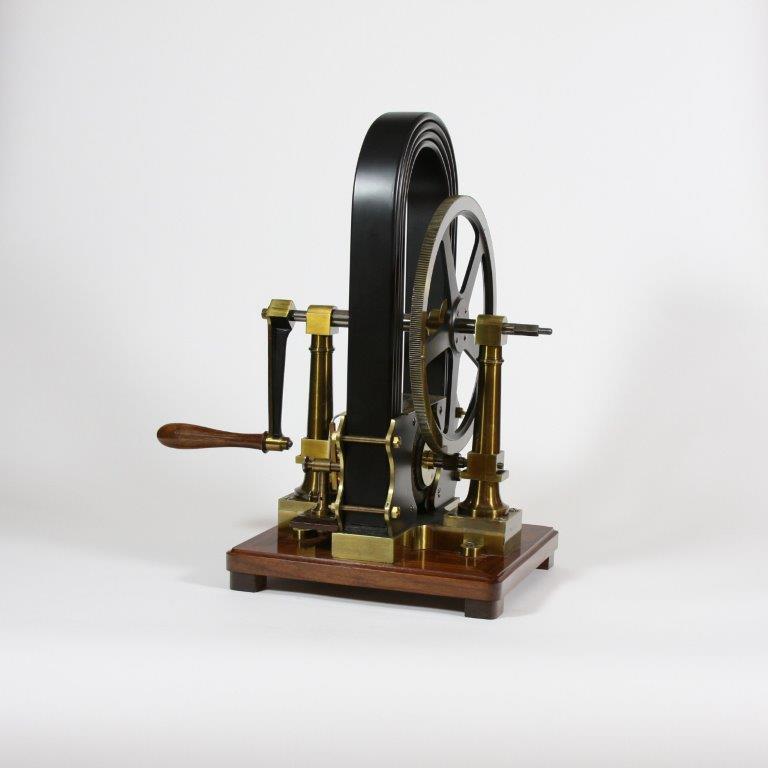 On display at The SPARK Museum of Electrical Invention are myriad devices that tell the exciting story of electrical history, including a string of devices that walk visitors from the early thought experiments of Michael Faraday to the electric induction motors of Nikola Tesla: 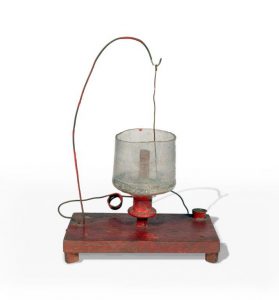 Faraday Rotating Cup Experiment: Michael Faraday’s rotating cup device, which he invented in 1822, is one of the world’s earliest electric motors. He conceived of the experiment as a way of confirming and demonstrating Hans Christian Oersted’s observation that a magnetic field exists in a spiral around a conductor. In Faraday’s device, a permanent magnet is placed vertically inside a container of mercury. A copper wire is suspended into the mercury from above. When an electric current is passed through the wire and mercury, an electromagnetic field grows around the wire and interacts with the field from the permanent magnet, causing the wire to rotate around the magnet.

Henry Reciprocating Motor: Along with Michael Faraday, Joseph Henry is often referred to as a founding father of the electrical industry. In 1831, Henry created one of the earliest machines to produce motion from electromagnetism. Also one of the earliest electric motors, Henry’s device consisted of a long electromagnet perched on a pole, rocking back and forth from polarity changes caused by the magnet connecting with battery leads on each side. Henry’s work was the foundation for Thomas Davenport’s 1834 electric motor, which was used to operate model cars and trains. One of the two electromagnets from Henry’s original machine is on display at The SPARK Museum. 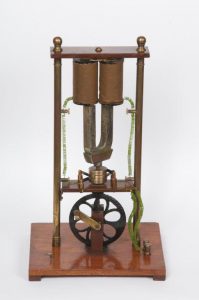 Pixii Dynamo: In 1832, Frenchman Hippolyte Pixii used Faraday’s principles to build the first direct current dynamo, or electrical generator. The device consists of a permanent magnet spun around by use of a hand-operated crank. As the magnet rotates, its poles swing by a piece of iron wrapped in wire, producing small pulses of alternating current with each passing. To convert the pulses into direct current, Pixii developed what’s known as a commutator. The Pixii Dynamo, the first device to generate both AC and DC, is the actual patent model submitted by Pixii. It’s truly a one-of-a-kind item.

Gramme Dynamo: In 1871, Zenobe Theophile Gramme invented his industrial-strength dynamo, taking the devices from the level of electronic experimentation in Pixii’s day to the level of productive machinery. Gramme’s invention was the first to be used for manufacturing and farming, and together with French engineer Hippolyte Fontaine, Gramme founded a factory to produce the machine and several other devices. Even today, the Gramme dynamo serves as the basis for the design of many direct-current electric motors.

Tesla Polyphase Motor: This device, invented by Nikola Tesla, is a two-phase alternating current electric induction motor made of brass, wood, copper, steel, iron and ebonite. In this iteration of Tesla’s design, four electromagnets are supported on a 9 ¼-inch circular iron core that reaches 18 inches at its highest point. The four-pole rotator is hinged, allowing the motor to operate in a vertical or horizontal plane. Tesla worked out the basic principles of this motor in 1883 and had a 400-watt model by 1888. The specific device on display at The SPARK Museum, from circa 1900, is signed “ARRIGHINI ANGELO COSTRUTTORE, MILANO.”

Yes, all of these amazing devices are part of the massive display at our science and history museum in Bellingham, WA. Where else, outside of the Smithsonian in the other Washington, can you see such an extensive collection of electrical history?

What are you waiting for? Come check out The SPARK Museum of Electrical Invention this weekend.