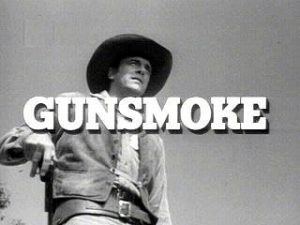 Gunsmoke is an American radio and television Western drama series created by director Norman Macdonnell and writer John Meston. The stories take place in and around Dodge City, Kansas, during the settlement of the American West. The central character is lawman Marshal Matt Dillon, played by William Conrad on radio and James Arness on television. When aired in the UK, the television series was initially titled Gun Law,  later reverting to Gunsmoke.

The radio series ran from 1952 to 1961. John Dunning  wrote that among radio drama enthusiasts, “Gunsmoke is routinely placed among the best shows of any kind and any time.” The television series ran for 20 seasons from 1955 to 1975, and stands as America’s longest-running prime time, live-action drama with 635 episodes. In 2010, Law & Order tied Gunsmoke for most seasons for a live action drama series when it finished its 20th and final season, but the show finished 179 episodes short of Gunsmoke’s final total; in terms of prime-time scripted series with continuing characters, The Simpsons is the only program to exceed 20 seasons. At the end of its run in 1975, Los Angeles Times columnist Cecil Smith wrote: “Gunsmoke was the dramatization of the American epic legend of the west. Our own Iliad and Odyssey, created from standard elements of the dime novel and the pulp western as romanticized by [Ned] Buntline, [Bret] Harte, and [Mark] Twain. It was ever the stuff of legend.”

In the late 1940s, CBS chairman William S. Paley, a fan of the Philip Marlowe radio serial, asked his programming chief, Hubell Robinson, to develop a hardboiled Western series, a show about a “Philip Marlowe of the Old West”. Robinson instructed his West Coast CBS Vice President, Harry Ackerman, who had developed the Philip Marlowe series, to take on the task.[citation needed]

Ackerman and his scriptwriters, Mort Fine and David Friedkin, created an audition script called “Mark Dillon Goes to Gouge Eye” based on one of their Michael Shayne radio scripts, “The Crooked Wheel”. Two auditions were created in 1949. The first was very much like a hardboiled detective series and starred Michael Rye (credited as Rye Billsbury) as Dillon; the second starred Straight Arrow actor Howard Culver in a more Western, lighter version of the same script. CBS liked the Culver version better, and Ackerman was told to proceed.

A complication arose, though; Culver’s contract as the star of Straight Arrow would not allow him to do another Western series. The project was shelved for three years, when producer Norman Macdonnell and writer John Meston discovered it while creating an adult Western series of their own.[citation needed]

Macdonnell and Meston wanted to create a radio Western for adults, in contrast to the prevailing juvenile fare such as The Lone Ranger and The Cisco Kid. Gunsmoke was set in Dodge City, Kansas, during the thriving cattle days of the 1870s. Dunning notes, “The show drew critical acclaim for unprecedented realism.”

Gunsmoke was often a somber program, particularly in its early years. Dunning writes that Dillon “played his hand and often lost. He arrived too late to prevent a lynching. He amputated a dying man’s leg and lost the patient anyway. He saved a girl from brutal rapists then found himself unable to offer her what she needed to stop her from moving into … life as a prostitute.”  Some listeners, such as Dunning, argue the radio version was more realistic. Episodes were aimed at adults and featured some of the most explicit content of their time, including violent crimes, scalpings, massacres, and opium addicts. Many episodes ended on a somber note, and villains often got away with their crimes. Nonetheless, due to the subtle scripts and outstanding ensemble cast, over the years, the program evolved into a warm, often humorous celebration of human nature.

Apart from the doleful tone, Gunsmoke was distinct from other radio Westerns, as the dialogue was often slow and halting, and due to the outstanding sound effects, listeners had a nearly palpable sense of the prairie where the show was set. The effects were subtle but multilayered, giving the show a spacious feel. John Dunning wrote, “The listener heard extraneous dialogue in the background, just above the muted shouts of kids playing in an alley. He heard noises from the next block, too, where the inevitable dog was barking.”

Gunsmoke was also unique from other Westerns in that it was unsponsored for the first few years of production. The program got its support from CBS for the first two years. Series producers felt that if the show were sponsored, they would have to “clean the show up”.  The producers wanted to find a sponsor that would allow them to keep the show the way it was.