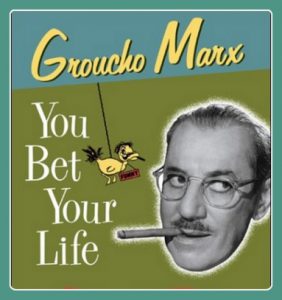 You Bet Your Life is an American quiz show that aired on both radio and television. The original and best-known version was hosted by Groucho Marx of the Marx Brothers, with announcer and assistant George Fenneman. The show debuted on ABC Radio on October 27, 1947, then moved to CBS Radio debuting October 5, 1949 before making the transition to NBC-TV and NBC Radio on October 4, 1950. Because of its simple format, it was possible to broadcast the show simultaneously on radio and television. June 10, 1960 was the last episode aired in its radio broadcast format. For its final season debuting September 22, 1960, the TV show was renamed The Groucho Show and ran a further year.

The play of the game, however, was secondary to the interplay between Groucho, the contestants, and occasionally Fenneman. The program was rerun into the 1970s, and later in syndication as The Best of Groucho. As such, it was the first game show to have its reruns syndicated.

The mid-1940s was a lull in Groucho Marx’s career. His radio show Blue Ribbon Town, sponsored by Pabst Blue Ribbon beer, had begun in March 1943 and had failed to catch on. Groucho left the program in June 1944, replaced by vocalist Kenny Baker until the show’s end two months later. He also reluctantly appeared in two movies with brothers Chico and Harpo Marx, A Night in Casablanca and the lackluster Love Happy.

During a radio appearance with Bob Hope in March 1947, Marx ad-libbed most of his performance after being forced to stand by in a waiting room for 40 minutes before going live on the air. John Guedel, the Hope program’s producer, formed an idea for a quiz show and approached Marx about the subject.

After initial reluctance by Marx, Guedel was able to convince him to host the program after Marx realized the quiz would be only a backdrop for his contestant interviews and the storm of ad-libbing that they would elicit. Guedel also convinced Marx to invest in 50% of the show, in part by saying that he was “untouchable” at ad-libbing, but not at following a script.

As Marx and the contestants were ad-libbing, he insisted that each show be filmed and edited before release to remove the risque or less interesting material. The show for the studio audience ran longer than the broadcast version. The president of Film Craft Productions, which did the filming, cited it as the first TV show filmed before a live audience as part of a lengthy essay about production procedures.

Contestant teams usually consisted of one male and one female, most selected from the studio audience. Occasionally, famous or otherwise interesting figures were invited to play (e.g., a Korean-American contestant who was a veteran and had been a prisoner of war during the Korean War).

After his signature introduction of “Here he is: the one, the only…” by Fenneman and finished by a thunderous “GROUCHO!” from the audience, Marx would be introduced to the music of “Hooray for Captain Spaulding“, his signature song. After which, Groucho would be introduced to the contestants and engage in humorous conversation for a lengthy period of time where Groucho both improvised his responses and employed prepared lines written by the show’s writers using pre-show interviews.

Some show tension revolved around whether a contestant would say the “secret word”, a common word revealed to the audience at the show’s outset. If a contestant said the word, a toy duck resembling Groucho—with eyeglasses and a mustache—descended from the ceiling to bring a $100 bill. A cartoon of a duck with a cigar was also used in the opening title sequence. In one episode, Groucho’s brother Harpo came down instead of the duck, and in another a model came down in a birdcage with the money. The duck was occasionally replaced with various other things, for example a wooden Indian figure, each carrying the required $100 to the lucky contestant. Marx would sometimes direct conversation to encourage the secret word to come up.