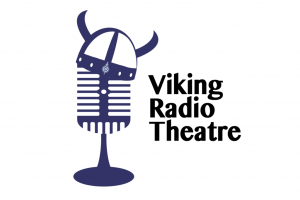 Viking Radio Theatre is a program bringing back the flair and unique theatrical thrill of radio drama to today’s airwaves. Our shows dramatize theatrical scripts into an audio form, telling the story with voice and sound effect. During each program we try to bring a variety of scripts, so that each episode has something for everyone; be it comedy, suspense, drama or science fiction.

The primary goal of this program is to showcase the talent of Western students and the local community. That means that as much as possible, every script you hear will be an original work written and performed by the excellent actors and writers in the Bellingham area. We believe that everyone, whether they think of themselves as a writer or an actor or not, has stories to tell and creative input to give. That’s why Production Meetings for the show are open to everyone.

In the end, we hope to make a lasting impact on our community, reviving a way of telling stories that once captivated so many. In the age of big budget special effects and video everything, Viking Radio Theatre invites you to close your eyes, listen, and illustrate our stories in the best way possible; with your imagination.