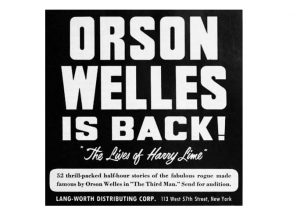 The Adventures of Harry Lime is one of the most successful series created by prolific British radio producer Harry Alan Towers and his company Towers of London. Towers and Graham Greene, author of The Third Man, had the same literary agent, and Towers learned that Greene had not sold the rights to the character of Harry Lime to Alexander Korda when he sold Korda The Third Man. Towers quickly bought the rights to the character and in 1951 he put a syndicated radio series into production. Orson Welles reprised the role of Harry Lime in a series of adventures that preceded the story told in The Third Man.[1]

Several episodes would begin with “The Third Man Theme” being played, abruptly cut off by an echoing gunshot. Then Welles would speak: “That was the shot that killed Harry Lime. He died in a sewer beneath Vienna, as those of you know who saw the movie The Third Man. Yes, that was the end of Harry Lime … but it was not the beginning. Harry Lime had many lives … and I can recount all of them. How do I know? Very simple. Because my name is Harry Lime.”

Although often cited as a BBC production, the series was one of a number produced and distributed independently by Towers of London and syndicated internationally.