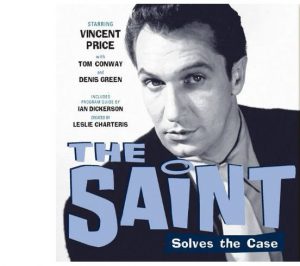 The Saint was a radio adventure program in the United States that featured a character (“a swashbuckling, devil-may-care Robin Hood type who, in his attempt to help people, remained just one step ahead of the police and crooks—both of whom he combatted”) created by author Leslie Charteris. As the program’s introduction said, The Saint (the alias of Simon Templar), was “known to millions from books, magazines, and motion pictures.” Several versions of the program appeared on different networks.

The Saint began its life on radio in January 1945. Most old time radio reference books list the initial broadcast date as January 6, 1945, probably because that was when the program aired in the Eastern United States. In an initial story about The Saint, however, Billboard reported, “Series tees-off over NBC January 4 on 7 Western stations, with a repeat skedded [sic] for Saturday to hit 15 Midwestern and Eastern stations at 7:30 p.m. EWT.” That Saturday was January 6. The article noted the involvement of the character’s creator, saying: “All scripting will be under the supervision of Charteris, who will oversee the adaptations of his published works. If any originals are to be done, he’ll do them.”  Edgar Barrier starred, and Bromo-Seltzer was the sponsor. This version ended March 31, 1945.

The second iteration of The Saint on radio was a summer replacement for the Jack Carson Show on CBS. It began June 20, 1945, with Billboard reporting in a preview article, “There’s nothing definite now, but it’s expected here that if The Saint pulls an acceptable Hooperating for its 13-week spin, starting June 20, it may stay on the air permanently with Carson out …”  Despite that prediction, the program went off when its summer run ended September 12, 1945. Brian Aherne starred, and Campbell Soups was the sponsor.

The show’s third version, which began July 9, 1947, was limited to CBS’ West Coast network. It ended June 30, 1948.  The sponsor was Lever Brothers.  Vincent Price starred in this version and in most of the show’s episodes in the two versions that followed