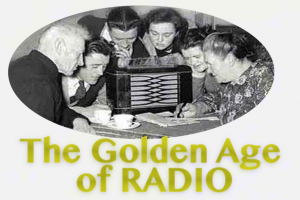 The old-time radio era, sometimes referred to as the Golden Age of Radio, refers to a period of radio programming in the United States lasting from the proliferation of radio broadcasting in the early 1920s until the 1950s, when television superseded radio as the medium of choice for scripted programming and radio shifted to playing popular music. During this period, when radio was dominant and filled with a variety of formats and genres, people regularly tuned into their favorite radio programs. According to a 1947 C. E. Hooper survey, 82 out of 100 Americans were found to be radio listeners.

The broadcasts of live drama, comedy, music and news that characterize the Golden Age of Radio had a precedent in the Théâtrophone, commercially introduced in Paris in 1890 and available as late as 1932. It allowed subscribers to eavesdrop on live stage performances and hear news reports by means of a network of telephone lines. The development of radio eliminated the wires and subscription charges from this concept. 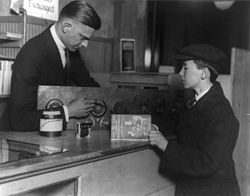 Boy learning how to build his own radio circa 1922.

On Christmas Eve 1906, Reginald Fessenden is said to have broadcast the first radio program, consisting of some violin playing and passages from the Bible. While Fessenden’s role as an inventor and early radio experimenter is not in dispute, several contemporary radio researchers have questioned whether the Christmas Eve broadcast took place, or whether the date was in fact several weeks earlier. The first apparent published reference to the event was made in 1928 by H.P. Davis, Vice President of Westinghouse, in a lecture given at Harvard University. In 1932 Fessenden cited the Christmas Eve 1906 broadcast event in a letter he wrote to Vice President S.M. Kinter of Westinghouse. Fessenden’s wife Helen recounts the broadcast in her book Fessenden: Builder of Tomorrows (1940), eight years after Fessenden’s death. The issue of whether the 1906 Fessenden broadcast actually happened is discussed in Halper and Sterling’s article “Seeking the Truth About Fessenden”[1] and also in James O’Neal’s essays.[2][3] An annotated argument supporting Fessenden as the world’s first radio broadcaster was offered in 2006 by Dr. John S. Belrose, Radioscientist Emeritus at the Communications Research Centre Canada, in his essay “Fessenden’s 1906 Christmas Eve broadcast.”

It was not until after the Titanic catastrophe in 1912 that radio for mass communication came into vogue, inspired first by the work of amateur (“ham”) radio operators. Radio was especially important during World War I as it was vital for air and naval operations. World War I brought about major developments in radio, superseding the Morse code of the wireless telegraph with the vocal communication of the wireless telephone, through advancements invacuum tube technology and the introduction of the transceiver.

After the war, numerous radio stations were born in the United States and set the standard for later radio programs. The first radio news program was broadcast on August 31, 1920 on the station 8MK in Detroit; owned by The Detroit News, the station covered local election results. This was followed in 1920 with the first commercial radio station in the United States, KDKA, being established in Pittsburgh. The first regular entertainment programs were broadcast in 1922, and on March 10, Variety carried the front page headline: “Radio Sweeping Country: 1,000,000 Sets in Use.”[4] A highlight of this time was the first Rose Bowl being broadcast on January 1, 1923 on the Los Angeles station KHJ.