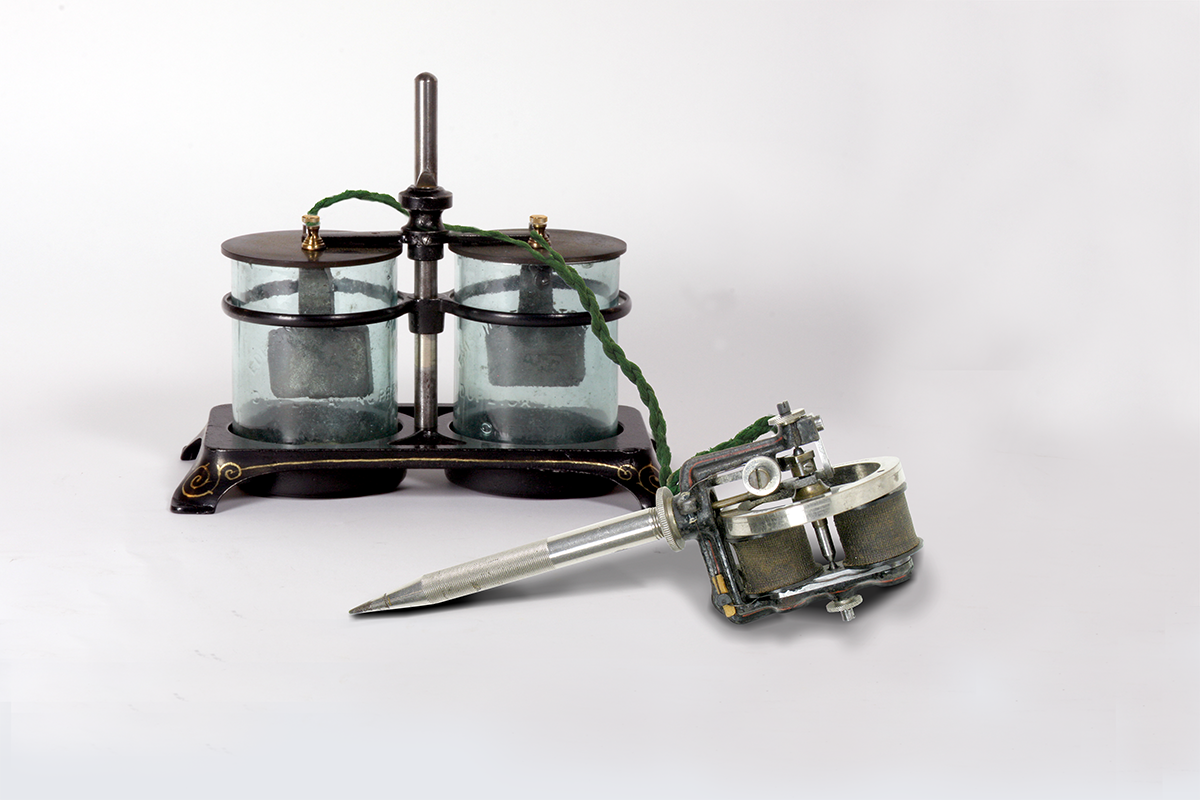 Do you have any tattoos? If so, you can probably thank Thomas Edison.

In 1875, Edison and his team invented a device that was the first practical application of the electric motor. His portable copy machine never was a huge success, but it did have long-lasting implications.

How did it work? What was its history? And what does any of that have to do with tattoos?

Well, sit back and read. It’s a fascinating tale.

A brief history of copying

The movable-type printing press, as you might be aware, was invented in the 15th century by Johannes Gutenberg, who built on the successes of inventors from Asia centuries before. The printing press was revolutionary. For the first time in history, it made printed works available to the general public. The process could be used to mass produce books or newspapers much more quickly than ever before, and it led to the spreading of knowledge throughout the world.

However, using a printing press was cumbersome and labor intensive — and it required the possession of a printing press. What if the average person wanted to make copies of important documents?

In the 1870s, an Italian named Eugenio de Zuccato received a patent for a process that used corrosive ink to create a stencil that could then be used to reproduce handwriting. The papyrograph process was rather involved, using lacquer-coated paper and a modified letter press, but the idea was key. If there were an easier way to create and use stencils, perhaps they were the key to home copying.

Enter Thomas Edison and his assistant, Charles Batchelor. Their goal was to use their vast knowledge of electricity to create a device that could use stencils to simply and easily produce copies of handwriting. Batchelor’s Technical Notes and Drawings contains a drawing dated July 18, 1875, of a “pen for autographic press” that looks somewhat like a standard writing pen with a battery-powered motor attached to the top. The electric pen was born.

Here’s how the pen worked: The electric motor at the top of the pen turned a cam, which when turning caused a needle to extend through the end of the pin and prick a hole in the paper. The pen’s cam worked like a cam in an internal combustion engine, turning radial motion into linear as the needle extended and withdrew rapidly to make patterns of perforations in the paper, wherever the user’s hand was writing.

Once the paper was perforated as desired, the user would then take an inking roller to pass ink through the perforations to a piece of paper (or other material) beneath. Copy complete!

Edison and his team sold the pens in 1875 and 1876, at which point they turned the process over to Western Electric Manufacturing Company, who was to manufacture and sell the pens and pay royalties to Edison. Their goal in 1877 was to produce at least 200 pens per month. By 1880, a number of competitors were in the market, and the Edison electric pen was in decline, according to research from Bill Burns.

(By the way, if you want to see an electric pen in person, stop by the SPARK Museum of Electrical Invention in downtown Bellingham — once we’ve reopened, anyway — and check it out.)

A new industry is born

Edison’s electric pen, despite being the first practical use of the electric motor, wasn’t a huge success. However, as is the case throughout the history of electrical invention, the technology lived on. In 1891, inventor Samuel O’Reilly received a patent for a tattooing machine that was based on the electric pen. Previously, tattoo artists had been able to perforate the skin about two or three times per second. O’Reilly’s device could perforate the skin at an incredible 50 times per second. According to Inked Magazine, the tattoo machine “completely revolutionized the industry,” and in the 130 years since, the device hasn’t even changed a whole lot.

Faster and better tattoos may not have been what Edison had in mind, but his and Batchelor’s work would live on long after the uneventful passing of the electric pen.

Editor’s note: For a more complete overview of Edison’s electric pen, read this extensive and excellent report from Bill Burns of FTL Design.