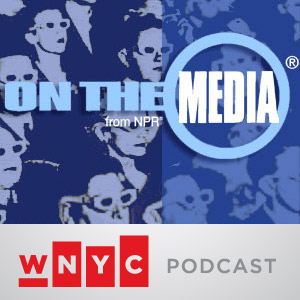 WNYC’s weekly investigation into how the media shapes our world view. Brooke Gladstone and Bob Garfield give you the tools to survive the media maelstrom.

Our weekly podcast explores how the media ‘sausage’ is made, casts an incisive eye on fluctuations in the marketplace of ideas, and examines threats to the freedom of information and expression in America and abroad. For one hour a week, the show tries to lift the veil from the process of “making media,” especially news media, because it’s through that lens that we see the world and the world sees us.

As defined by co-host Garfield, On the Media covers “…anything that reaches a large audience—either electronically or otherwise…. Plus, throw into that anything that covers First Amendment issues; anything that has to do with freedom of speech, privacy, is also in our portfolio.”  The show explores how the media are changing, and their effects on America and the world. Many stories are centered on events of the previous week and how they were covered in the news. These often consist of interviews with reporters about the dilemmas they face in covering controversial issues.

Stories regularly cover such subjects as the use of video news releases, net neutrality, digital broadcast flags, media consolidation, censorship, freedom of the press, the influence of 24-hour cable news television coverage, media oppression, and how the media are changing with technology.

The show also addresses questions about how the media is influenced or spun by politicians, corporations, and interest groups with the intent to shape public opinion. This includes an OTM feature that covers the media’s use of terminologies that may engender biased points of view, and the use of hot-button issues and code words such as Michael Moore, torture, evangelical, and islamofascist.