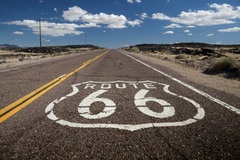 Sounds from the Mother Road is weekly exploration of the last 70 years of American Roots Music, featuring western swing, country, rockabilly, cowboy tunes and the artists who continue those traditions today. Hosted by Jamie Hoover.

Growing up listening to Bob Wills, Hank Williams, and Patsy Cline and going to her first Honky Tonk, The Trio Club in Mingus, Texas at eleven, Jamie Hoover comes by her love for American Roots Music naturally. As a volunteer programmer since 1989, her passion for Roots music found its first on-air home in California. For seven years, known as “Cow Patti” she was part of the day long program “FATSunday” modeled after the legendary KFAT radio station in Gilroy CA. In 1998 Jamie began “Sounds from the Mother Road” when she relocated to Gallup, New Mexico and in 2000 KSUT, Ignacio began airing The Mother Road. Her dedication to the traditions of American Roots Music continues as she searches out rare recordings and new artists. When she isn’t producing radio shows, she is the General Manager of KUGS-FM, a student operated radio station at Western Washington University, Bellingham, WA.