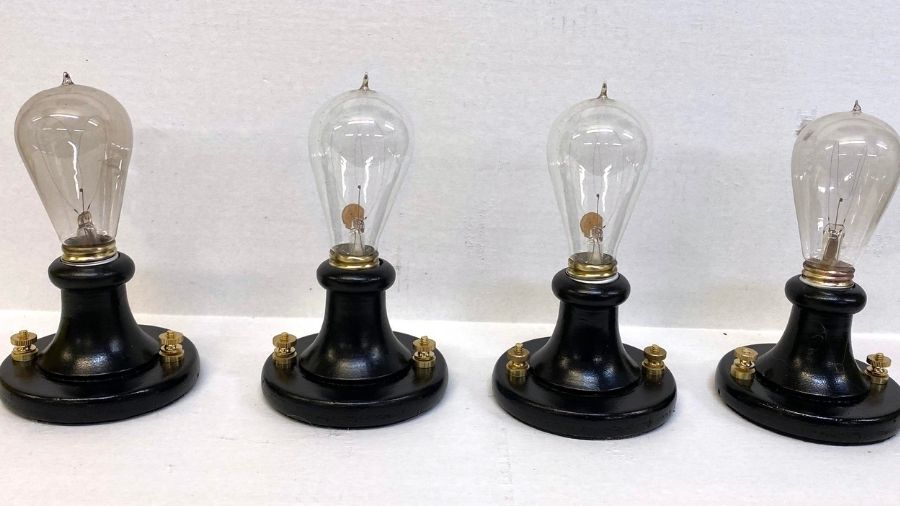 BY FELIKS BANEL
Reporting live from Seattle’s past

The HBO series “Gilded Age,” brought to the world of video entertainment by the same people responsible for “Downton Abbey,” has been methodically mining the larger-than-life characters of the late 19th century to present a colorful, melodramatic, and mostly entertaining look at America in the 1880s.

Now, as the series is about to illuminate inventor and entrepreneur Thomas Edison, it has come to light that a local man was tapped to build a high-wattage assortment of authentic electrical props for the high-end costume spectacle.

“I get calls occasionally from people looking for expert advice about historical stuff, particularly electrical stuff,” John Jenkins of Bellingham told KIRO Newsradio on Thursday. “In this case, it was a pretty well-known Hollywood prop master, and he said, ‘Hey, we’re doing this thing coming up called “Gilded Age” and we need to have some lightbulbs that would be appropriate for the period, and some fixtures. Can you tell us what kind of fixtures would have been appropriate in 1882?’”

“I recommended what he could use, and he asked me where he might be able to get some,” Jenkins continued. “And I said, ‘Well, I could make you some if you’d like.’ And so that’s how it happened.”

In the episode of “Gilded Age” which, based on last week’s preview, Jenkins believes will premiere this coming Monday, March 7, the props he made will figure prominently in a story arc involving Thomas Edison, who was known as the Wizard of Menlo Park.

“They wanted some kind of plain fixtures to go inside the architectural model for the train station. They wanted them to be able to light up and look [good] on camera. And they also wanted the wires leading to them to look authentic,” Jenkins said. “And they wanted a way to be able to control the filament, the brightness, because I had told [the prop master] that these filaments look fantastic if you dim them down to the point where you can actually see the filament glowing.”

When it comes to appropriate fixtures and other specifics about the history of electricity and electrical lighting, Jenkins is no dim bulb. He retired from the tech industry, and co-founded SPARK Museum of Electrical Invention in Bellingham. He’s also been collecting vintage and rare lightbulbs and radios and early electrical apparatus for decades, after being first inspired when he found an old RCA radio in his grandparents’ basement that was in need of some TLC.

“I took it home and fixed it and just kind of got hooked,” Jenkins said, and that led to collecting and repairing all kinds of old radios. “Later, as I got older, I became more interested in history and how one invention leads to another and how things develop.”

“And so my collection pursuits were more curated,” Jenkins continued. “I was trying to find things that would help fill in the gaps in the story. And along with that came an increase in my ability to buy rarer, more interesting things. So at the museum now, we have an amazing collection of many one-of-a-kind pieces that are really historically important.”

Because he’s been fabricating interactive exhibits at the museum – a process which often requires building authentic, one-of-a-kind, working replicas of vintage gear – Jenkins knew just what to do to build props for “Gilded Age” that would, literally, light up the room.

“The first lightbulb Edison made in 1879 had a kind of plain fixture made out of wood,” Jenkins said. “Ten years later, when they had their anniversary of the light bulb, they made some duplicates. I have a bunch of those, so I made a silicone rubber mold of one and I cast [several copies] in black polyurethane.”

Completing the authentic look for the fixtures required special hardware and wiring.

“The hardware is not old,” Jenkins continued. “It’s new hardware, but I aged it using some techniques I know to make the brass look old. And then I electrified them. I put an Edison socket inside it so you can screw a light bulb into it.”

What about the actual glass part of the prop?

“That was the tricky part, because [I’m not] a glass blower [and] I can’t make lightbulbs,” Jenkins said. “And there’s no way anybody, including me, is going to let [a filmmaker] use an authentic light bulb for a prop, because 1880 is when lightbulbs first started being mass produced, and so finding any surviving [early bulbs] is extremely rare.”

“What I did instead was I used bulbs from the first decade of the 20th century, carbon filament lamps,” Jenkins said, which are available for about $25 on eBay, and which make for a near-perfect visual match. “I told them there’s only one other person in the world who will notice that it’s not the right lightbulb.”

Sure enough, Jenkins says, that other person – a collector Jenkins knows who lives on the East Coast – saw the preview for next week’s episode and sniffed out the “fake.”

The “Gilded Age” team – including, apparently, creator Julian Fellowes – was really impressed by that first batch of Jenkins’ four fixtures and bulbs. A proverbial light went off, and they wanted more.

“[The prop master] called me back and said, ‘The director loves them,’” Jenkins said, then told him, “‘We want to use a fancier one, a little bit fancier fixture, to light up Thomas Edison’s face when he throws the switch and turns on the lights. We want to illuminate his face in a kind of a tight shot. So can you make a nicer looking one for that?’”

For that special fixture, the hardware, wiring, and glass are the same as the first batch, but Jenkins made the fancier fixture itself from turned wood, and gave it a more ornate carved look than the others.

Jenkins admits he never watched “Downton Abbey,” and likely wouldn’t be watching “Gilded Age” were it not for the special glow created by his behind-the-scenes role.

Still, if watching “Gilded Age” might jolt anyone into wanting to learn more about early electricity and Thomas Edison’s contributions to the world of electric lighting, Jenkins suggests a visit to his museum in Bellingham, particularly to get a look at the real – and exceedingly rare – thing.

Jenkins says Edison first perfected his electric bulb design in time to create an outdoor light display outside his laboratory at Menlo Park, New Jersey, for New Year’s 1879. Estimates are that Edison manufactured between 30 and 40 examples of that original lamp for that festive display, Jenkins said.

“Today, only three of those lamps survive,” Jenkins said. “There’s one in a private collection, there’s one at the Edison Museum in Menlo Park, and I have one at the museum in Bellingham.”

SPARK Museum of Electrical Invention is open Wednesdays through Sundays, 11 a.m. to 5 p.m., with the popular “megazapper” and Tesla coil show at 2:30 p.m. on Saturdays and Sundays.

You can hear Feliks every Wednesday and Friday morning on Seattle’s Morning News, read more from him here, and subscribe to The Resident Historian Podcast here. If you have a story idea or a question about Northwest history, please email Feliks here.