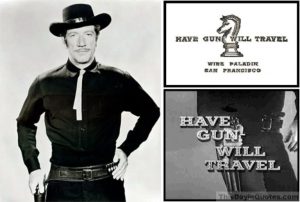 An American Western television series that aired on CBS from 1957 through 1963. It was rated number three or number four in the Nielsen ratings every year of its first four seasons.  It was one of the few television shows to spawn a successful radio version. The radio series debuted November 23, 1958.

This series follows the adventures of a man calling himself “Paladin” (played by Richard Boone on television and voiced by John Dehner on radio), taking his name from that of the foremost knight warriors in Charlemagne‘s court. He is a gentleman gunfighter who travels around the Old West working as a mercenary gunfighter for people who hire him to solve their problems for them. Paladin may charge steep fees to clients who can afford to hire him, typically $1000 per job, but will provide his services for free to poor people who need his help. Like many westerns, the television show was set during a nebulous period after the Civil War. The radio show explicitly states the year in the opening of every episode with the introduction, “San Francisco, 1875. The Carlton Hotel, headquarters of the man called … Paladin!”

The title was a variation on a catchphrase used in personal advertisements in newspapers like The Times, indicating that the advertiser was ready for anything. It was used this way from the early 20th century. A tropecommon in theatrical advertising was “Have tux, will travel”, and CBS claimed this was the inspiration for the writer Herb Meadow. The television show popularized the phrase in the 1960s, and many variations were used as titles for other works, but was pre-dated by Have Space Suit—Will Travel by Robert A. Heinlein.