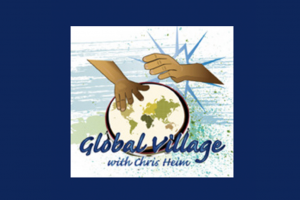 As Duke Ellington famously said, there are two kinds of music. Global Village plays the good kind…from all over the globe. With a fresh, inventive mix of international sounds and styles, and a welcoming presentation, the award-winning show is like nothing else on radio, a special kind of “go-to” programming that is both entertaining and educational – speaking to both the joys of musical discovery and enlightening entertainment.
The program is FREE and available for daily or weekend use. Regular holiday shows and specials are available to all. Global Village also works well as a companion program alongside a wide range of local and national shows.

BROADCAST TO DATE ON OVER 260 STATIONS IN 35 STATES, CANADA & NEW ZEALAND

GLOBAL VILLAGE
Global Village is an eclectic, world music-based show. It features the latest and best in world music new releases and classics along with a wide variety of artists and selections from nearly all other genres of music that incorporate influences from around the world.
Informative and entertaining, current yet set in a wider musical and historical context, the show draws on the knowledge, experience and congenial personality of host Chris Heim – and a library of over 50,000 albums, including many out-of-print titles – to pull these musical strands together into an intriguing and captivating whole.

With its broad range of artists and styles, the program works well alongside AAA, jazz, or other local and national world music shows, including Afropop, Etown, JazzSet, World Cafe, and similar local productions.

The distinctive and entertaining music mix and presentation makes the show a stand-out that attracts listeners. Its appeal to the qualities of heart, mind and spirit makes Global Village an obvious choice for the classic public radio listener, while at the same time, speaking to a younger, increasingly multicultural and genre-hopping audience. At KMUW, where the show has run since 2007, the largest audience is 25-34, though the show attracts across all age ranges.

Producer/Host – Chris Heim
Radio and world music veteran Chris Heim began a lifelong love affair with radio after wandering into the University of Chicago campus station and being offered an unexpectedly open music slot. Her first radio job was at one of the Chicago area’s last true “free form” stations, WJKL. She later worked at WXRT Chicago’s progressive rock station, and then joined WBEZ Chicago Public Radio. There she hosted jazz and world music shows (the latter one of the first and longest running in public radio, starting just six months after the debut of Afropop) and served as Music Director. She was also executive producer and anchor for national broadcasts of the Chicago Jazz, Blues and Latin Music Festivals, and the Traffic series with Steppenwolf Theater. A freelance writer as well, Chris has written liner notes and bios, as well as features, cover stories and reviews for such publications as the Chicago Tribune, Utne, Global Rhythm, Dirty Linen, Jazziz, Jazz Times, Blues Revue, Option, Illinois Entertainer, and more.