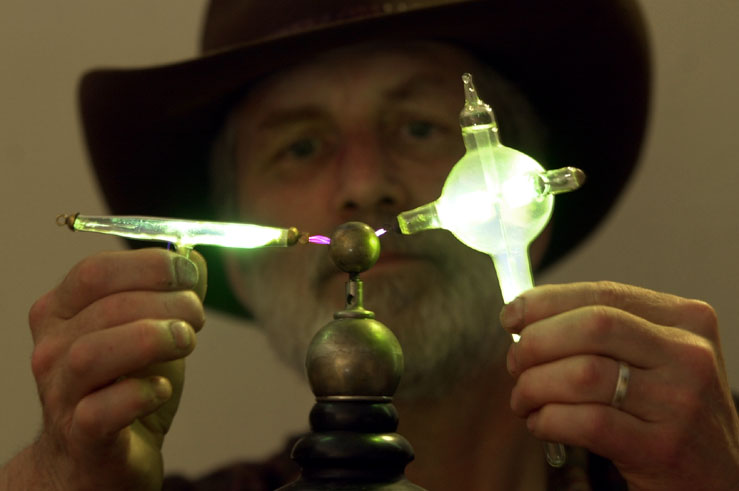 Here at SPARK Museum in downtown Bellingham, we sometimes refer to them as “ships in a bottle.”

The intricate glass tubes are individual works of art — swirling, colorful designs that truly could be ends in themselves, given how beautiful they are.

But as gorgeous as Geissler and Crookes tubes are, they are much more than things to look at. They are, in fact, a critical step on the progress of invention over the past 150 years.

In fact, we wouldn’t have had televisions and many other inventions without them.

Heinrich Geissler was born in 1814 in the village of Igelshieb in central Germany. His father was a glassblower who made intricate instruments such as barometers and thermometers. This familiarity would prove integral to the younger Geissler, who began winning awards for his own scientific devices in the mid-1800s. In 1857, he began playing around with a new form of device: glass cylinders filled with neon, argon, mercury vapor, sodium or similar contents and with an electrode at each end. When a high enough voltage was applied across the electrodes, the gas inside the tube began to emit a fluorescent light.

“What I find most interesting is they were just another way to see the energy,” says Tana Granack, SPARK Museum’s director of operations. “What was invisible is now wondrously observable and even measurable.”

These Geissler tubes, as they came to be known, were mass-produced beginning in the 1880s (after Geissler’s death) as novelty items. There are many of them in the collection here at Whatcom County’s SPARK Museum, and they’re beautiful to see.

But they are much more than just pretty things. Geissler tubes led to the discovery of the electron and the invention of many important devices, such as the vacuum tube, fluorescent lighting, sodium vapor lighting, neon lighting and the cathode ray tube (check out our oscilloscope and early TVs, none of which would be possible without CRTs), among many others.

William Crookes, a British chemist, modified Geissler tubes for his own experiments.

Whereas Geissler tubes create fluorescent discharge in a space with low evacuation, the tubes that Crookes created based on Geissler’s models had stronger evacuation, allowing the flow of electrons from the cathode to the anode (what came to be known as the cathode ray) to become longer and more distinct.

He produced special tubes to examine cathode rays at various configurations and gas pressures. Crookes was able to determine that these streams of electrons behaved differently in the tubes based on the level of the evacuation of gases from the tube. He also learned that those streams of electrons could be modified by magnets, and that they could cause fluorescent surfaces to produce light.

In fact, it was the discovery that the cathode rays could be bent by magnets that enabled CRTs to function as TVs and computer monitors. These CRTs use electromagnetic coils to focus the cathode rays and move them to different parts of the screen.

Speaking of TVs: If you want to see a working version of the first color television ever made — from RCA in 1953 — drop by SPARK Museum! It’s an impressive feat of engineering and design — and built on the work of scientists like Geissler, Crookes and many, many more.